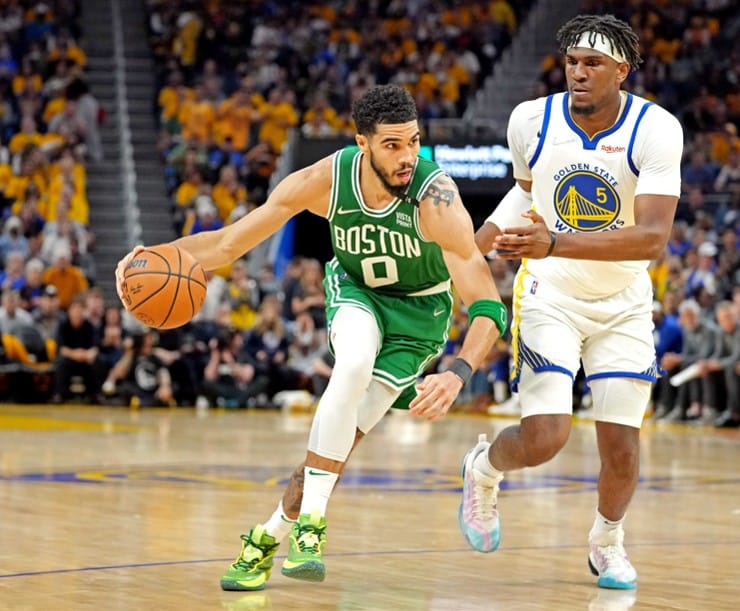 BetOnline is the Best NBA Sportsbook for Parlay Betting

BetOnline is offering a $1,000 bonus today. This sportsbook is the best for NBA betting during the 2022 NBA Finals. Click below to register.

Entering Game 3 of the 2022 NBA Finals, our betting experts at Basketball Insiders have picked the best prop bets for the Warriors vs Celtics rematch. Which team will score 20 points first in Game 3 at TD Garden? Will Jayson Tatum’s combined points, assists and rebounds add up to 40?

Furthermore, will Warriors center Kevon Looney amass at least nine rebounds in Game 3? Read the predictions below. Other NBA player props, Game 3 props, predictions, odds and betting picks for the 2022 NBA Finals are on the main page.

In Game 1 of the 2022 NBA Finals, the Celtics defeated the Warriors 120-108 at Chase Center. Thanks to Stephen Curry’s made 3-pointer at the 5:55 mark of the first quarter, the Warriors reached 20 points first. Then, in Game 2, Celtics guard Jaylen Brown sank a 3-pointer with 4:25 remaining in the opening quarter. Brown’s shot gave Boston a 22-13 score over Golden State.

As for Game 3, the C’s are 3.5-point favorites over the Dubs at TD Garden. Will the Celtics reach 20 points before the Warriors in Game 3? Yes, this is a fair bet. Boston is 6-0 in the 2022 NBA Playoffs after a loss. Bettors are expecting the C’s to come out firing on Wednesday night. Take the Celtics to win this bet.

Therefore, Tatum has yet to reach the 40-mark for combined points, rebounds and assists in the NBA Finals. However, in Game 7 of the Eastern Conference Finals, the fifth-year player closed out his outing with 26 points, 10 rebounds and 6.0 assists. His total came to 42. Likewise, he contributed 30 points, 9.0 rebounds and 4.0 assists in Game 6 against the Heat. Tatum’s total here is 43. Since Game 3 is at TD Garden, take the over.

For one final NBA player prop, Warriors center Kevon Looney is averaging 7.7 rebounds per game this postseason. This bet requires at least nine rebounds for the over. In Game 1 of the 2022 NBA Finals, the seventh-year player ended his night with 4.0 points, 9.0 rebounds and 5.0 assists in 25 minutes played. Next, the two-time NBA champion finished Game 2 with 12 points, 7.0 rebounds and 2.0 assists.

While Looney reached the 9-rebound mark for Game 1, he fell short in the following contest. Of course, it was also the same game the Warriors bounced back in this series, winning 107-88 on Sunday. Looney is quite unpredictable, needless to say. During the Western Conference Finals, the center accumulated 18 rebounds in Game 5 against the Mavericks. And he finished with 12 rebounds in the second and third matchups. Take the under at TD Garden.

BetOnline is one of the best sportsbooks in California and Massachusetts.