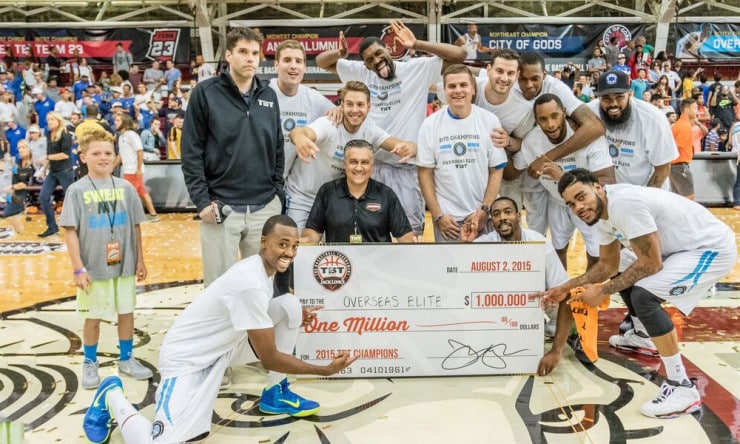 The Basketball Tournament is back and bigger than ever.

TBT also allows fans to support teams on their website, and the winning team’s supporters will split $200,000.  In order for a squad to be eligible for the tournament, they must have at least 200 fans supporting them on their team page. Teams started registering on April 1 and the deadline to finalize a roster is June 1.

The competition starts July 9-10, with the opening round games scheduled to tip off in Los Angeles, Chicago, Philadelphia and Charlotte. The semifinals (July 30) and championship game (August 2) will be played at Fordham University in New York and these rounds will be televised on ESPN for the second consecutive year.

Two years ago, in the inaugural TBT, the Notre Dame Fighting Alumni won and took home a $500,000 prize. Last year’s $1,000,000 winner was Overseas Elite, which was a team made up of former college stars who now play professionally overseas.

Nearly all of the players from last year’s TBT are returning, and they’ll be joined by other former NBA players who want to get in on the tournament action for the first time.

Other players will continue to be added to rosters between now and the June 1 deadline. There have been some rumors that one or two retired NBA superstars may decide to play, but it remains to be seen if they’ll follow through.

More college teams are expected to be added before the June 1 cutoff date.

Current NBA players cannot participate in the tournament due to their contracts, but they can be involved in other ways. For example, a number of NBA players have joined a team as a booster. This means that the NBA player will throw their support behind a team on social media and in-person at the games, which helps the TBT squad get the necessary 200 votes to be eligible.

Rondae Hollis-Jefferson, JaVale McGee, Marcus Morris and Markieff Morris have joined The Tournament as coaches or general managers. Other former NBA players will be coaching teams too, including Derek Anderson, Juan Dixon and Chucky Brown.

Some non-NBA athletes have also signed up to be a team’s booster, such as Atlanta Falcons quarterback Matt Ryan, New York Giants wide receiver Victor Cruz and Cincinnati Bengals cornerback Pacman Jones. A number of other celebrities have expressed interest in becoming a booster as well, including rapper The Game. Expect more booster announcements in the weeks to come.

This year, the TBT bracket will include 64 teams (as opposed to last year’s 97 teams), which eliminates the need for first-round byes. For a list of the teams that have registered this year and for more information about The Basketball Tournament, check out their website here.