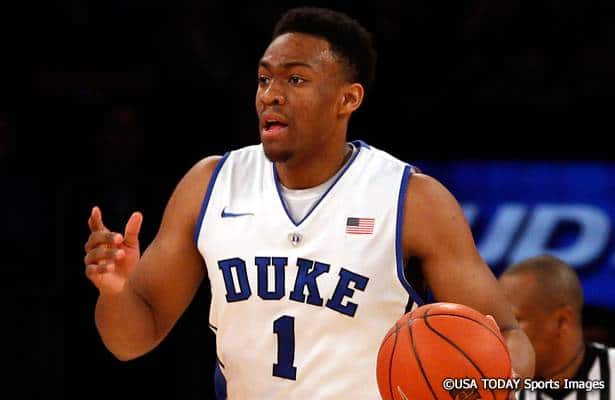 Both are weighing their options. Both are seriously considering returning, with Parker so much so that several scouts are claiming he’s coming back to school. But I think that’s premature. They have time. … I think both will probably declare at the end of the day, but I wouldn’t be shocked if they stayed either.

via Chad Ford of ESPN.com

Andrew Wiggins didn’t waste any time declaring for the 2014 NBA Draft, but several other top prospects haven’t made a decision just yet. Jabari Parker and Joel Embiid remain undecided, according to Ford and other credible reports.

Throughout the course of the season, Parker and Embiid made it clear they weren’t sure about being one-and-done players. Both individuals value education and understand how attending college for more than one season can help a player’s game. Usually, these kinds of reports are hard to believe since players rarely turn down the chance to be a top-three pick in the draft and the millions of dollars that comes with that. However, Parker and Embiid are different and have hinted all along that returning to school for a second season is a possibility.

Parker described his freshman season as “incomplete” after Duke was upset in the NCAA Tournament by Mercer, and being eliminated so early could motivate him to return to school just as it did Marcus Smart last year. Also, the fact that Duke is bringing in a monster recruiting class that includes Parker’s close friend and fellow Chicago native Jahlil Okafor as well as Tyus Jones and Justise Winslow among others makes this a tough choice for Parker, since the Blue Devils would be the favorite to win the national championship if he decided to play his sophomore season.

While it may seem like a no-brainer for Embiid to enter the draft after his stock skyrocketed thanks to an excellent freshman season at Kansas, the big man has said that he doesn’t feel like he’s ready for the NBA and everything that comes with being a pro. As he has pointed out, he’s just getting used to living on his own and he doesn’t even have a license yet. If Embiid doesn’t feel he is ready to be play in the league and have that lifestyle, returning to college and taking some more time to grow up may be the best decision for him. Also, if he’s concerned that his back injury will cause him to slip down draft boards, perhaps waiting a year and going through the pre-draft process next summer when he’s completely healthy is a smart move. Recently, there was a report that Embiid had decided to enter the draft, but the seven-footer refuted it on Twitter.

The deadline for early entry is April 27, so Parker and Embiid have three and a half more weeks until they need to make a decision. Returning to school would be risky since both players are being projected as top-three picks, but it seems Parker and Embiid really haven’t decided what to do.

D’Antoni has one more guaranteed season left on his Lakers contract, and the club is leaning toward retaining him despite some privately disgruntled players and massive public disdain. It’s not clear which way the organization will go with him.

Mike D’Antoni’s future is up in the air because the team has failed to live up to expectations for two consecutive seasons and there has been a lot of drama behind the scenes.

It’s no secret that Pau Gasol and D’Antoni have butted heads over the last two seasons, and recently Chris Kaman said that he had gone three weeks without speaking to the head coach because their relationship had soured. In addition to that, reports surfaced several weeks ago suggesting that Kobe Bryant has no interest in playing for D’Antoni next season.

Fans in Los Angeles are frustrated with D’Antoni and often point the blame at the head coach for their recent struggles. It’s worth noting that D’Antoni hasn’t had much to work with this season, as the team has dealt with a number of significant injuries.

If the Lakers are leaning toward retaining D’Antoni, it may mean that they will let him finish the contract and then try to find a replacement during the summer of 2015 (when the team hopes to be active in free agency).

»In Related: Where Do the Lakers Go From Here?

Gibson: Listen! I decided at the beginning of the year when I injured my foot again to take the year to get my mind right and see if this is still what I want to do. That’s what drives me. These kids [on my AAU team] look up to me like I’m their Michael Jordan. It inspires me to get back in the gym and get back out there. Really, March Madness kind of put it over the top. I’ve been getting myself back in the right frame of mind to make a run at getting back in the league next season.

I definitely have to prove myself over again. These teams want to know why. Teams were contacting me at the deadline to see if I wanted to come back for a 10-day contract. I was really hiding out. Nobody really knew what was going on with me. So I know I got to come back and prove myself. I know it will be difficult, but with the mind frame that I’m in, I know I can accomplish whatever it is I want to do.

Gibson hasn’t been on an NBA roster since last season, when he played 46 games for the Cleveland Cavaliers. He was charged with second-degree battery last offseason, which may have scared some teams off when he was an unrestricted free agent.

Gibson said that he received some 10-day offers during the 2013-14 season, but decided to take this year off as he recovers from a foot injury that occurred several months ago. The 28-year-old will try to resume his NBA career next year, and it’s possible that he could get a look from a team.

Over the course of his seven-year NBA career, Gibson averaged 7.8 points, two rebounds and two assists. He spent his entire career with the Cavaliers, starting 77 games during that span. Gibson’s best season was 2010-11, when he averaged 11.6 points and three assists.