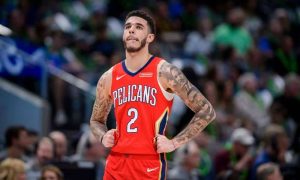 The NBA is in the midst of an investigation into a potential tampering issue centered on the Chicago Bulls recently struck trade deal to bring in the former New Orleans Pelicans point guard, Lonzo Ball

Now, the Bovada sportsbook has recently updated its outright betting line on the topic and, if the latest odds are to be believed, things aren’t looking good for Chicago, Lonzo Ball, or New Orleans.

The Bulls managed to negotiate and announce the signing of Ball from the Pelicans in lightning-quick time, literally the near moment the trade window blew open last month.

Unsurprisingly, New Orleans fans were left aghast at the haste in which Ball was ushered off to Chicago. Unfortunately, so too was the National Basketball Association, which was just as quick to begin its investigation into possible tampering. The NBA has cited the potential for ‘illegal contact among teams and players ahead of the free agency window’ as the reason for its inquiry.

Now, the world’s premier sportsbooks have begun throwing their voices into the melee, offering very short odds on the Bulls to have their hides slapped by the NBA. Bovada certainly expects the NBA to come down hard on Chicago Bulls, broadcasting its outright on some form of punishment at -400.

If the sportsbooks are correct, and Chicago is found guilty of breaking NBA regulations and initiating contact with their new point guard prior to the beginning of the trade window, the Bulls could face a maximum fine of $10 million.

Perhaps worst still, there is the potential for the loss of draft picks; executives involved in the wrongdoings could face suspension, and, worst of all, Ball’s contract could even be torn up and the trade vetoed.

Were Ball’s $85 million contract to be thrown out by the NBA, it would likely set off a chain reaction: Chicago sent Tomas Satoransky, Garrett Temple, and a future second-round draft pick to New Orleans in exchange for Ball. One assumes that if oddsmakers are correct, this could even mean that the two players end up having to unceremoniously return to the Windy City

Keep an eye on this story as it unfolds. Firstly, because this Bulls team is in desperate need of a new point guard and Ball is one of the better young prospects in his position in the NBA, averaging 14.6 PPG and 5.7 APG in 2021. To lose Ball at this stage would throw a real spanner into head coach Billy Donovan’s rebuilding plans.

Secondly, those Bovada odds: news breaks quickly during the offseason, and there’s a chance of striking it lucky on a simple Yes/No bet if you’re quick to action your wager at the Bovada sportsbook.