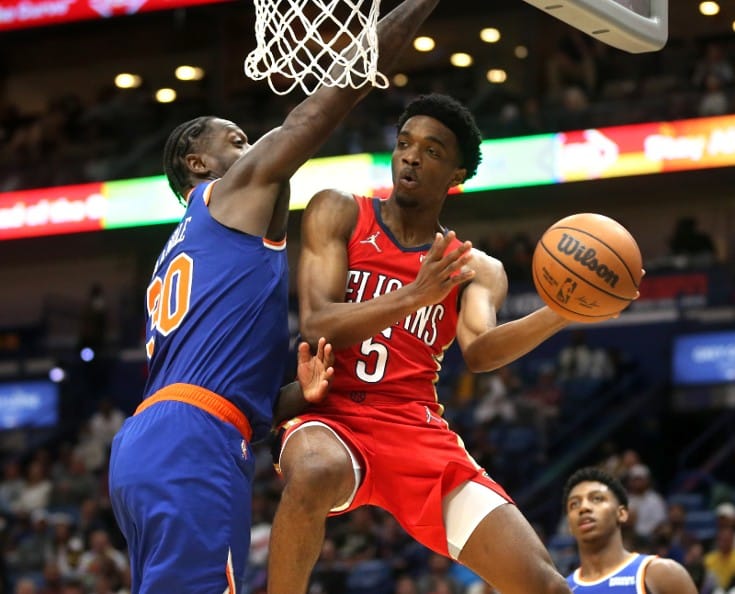 In Thursday night’s interconference rematch, the New Orleans Pelicans (16-28, 20-24 ATS) are facing off versus the New York Knicks (22-23, 22-23 ATS); NBA picks are available here. Will the Pelicans win their first game against the Knicks since Jan. 10, 2020? In addition to the starting lineups, our notable NBA picks and betting trends are featured below.

All Pelicans vs Knicks betting odds can be found at BetOnline

Additionally, on Monday, in the Pelicans’ 104-92 road loss versus the Celtics, center Jonas Valanciunas added one more double-double to his career total. He accumulated 22 points, 14 rebounds and 4.0 assists in 33 minutes played. Forward Brandon Ingram also earned a double-double, amassing 15 points, 10 rebounds and 6.0 assists in 35 minutes of action. After this loss, they have won just four of their past 10 games. New Orleans is 6-17 away, 10-11 at home and 7-16 ATS away this season.

As for the Knicks, in their 112-110 home loss against the Timberwolves on Tuesday, guard Evan Fournier led his team in scoring, putting up 27 points in 37 minutes on the court. Forward Julius Randle closed out his performance with 21 points, 9.0 rebounds and 9.0 assists in 39 minutes played. New York outscored Minnesota 40 to 25 in the third quarter. Counting this loss, the team is 11-13 at home, 11-10 away and 11-13 ATS at home this season.

Moreover, the Knicks defeated the Pelicans this season on Oct. 30, 2021, winning 123-117 at Smoothie King Center. Needless to say, New York is on a three-game winning streak versus New Orleans. The Pelicans have not beaten the Knicks since Jan. 10, 2020, when they won 123-111 at Madison Square Garden.

Heading into tonight’s interconference rematch, New York will no longer have Solomon Hill on the roster. Though, Hill was already set to miss the remainder of the season due to a right hamstring tendon tear. The organization waived the forward late Wednesday evening. This move was necessary in order for the team to sign Ryan Arcidiacono to a 10-day contract. In a total of 207 games played, Arcidiacono averaged 4.8 points, 2.0 rebounds and 2.2 assists per game. Over the course of his career, the fifth-year veteran averaged 43.1 % from the field and 37.3% from three-point range.

To make room on the roster for Ryan Arcidiacono, the Knicks waived Solomon Hill: pic.twitter.com/jBgBqaS22v

New York will continue to be without Derrick Rose and Cam Reddish, and it should go without saying that Solomon Hill is out for the season. But, head coach Tom Thibodeau has the tools to turn his team around, especially at home. Therefore, think about picking the Knicks to win, cover the spread and the total will go under 211.5. If you are new to sports betting and want to learn more, check out our handicap betting guide. Other NBA Picks are on the main page.