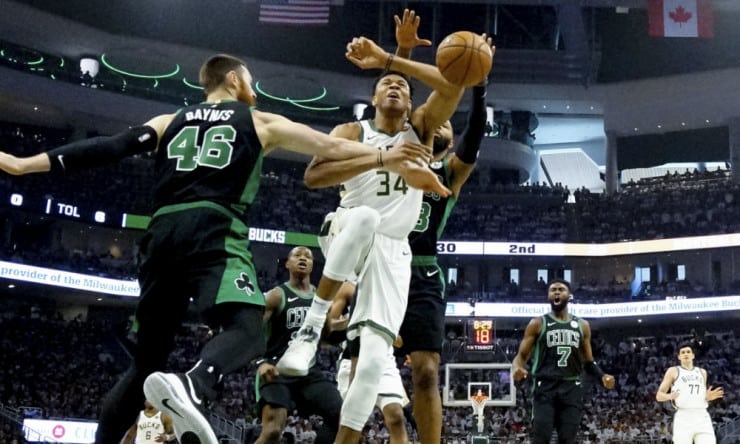 The Milwaukee Bucks missed out on a potential first NBA Finals appearance since back in 1971, after Mike Budenholzer’s team lost out to the Toronto Raptors in Game six of their Eastern Conference Finals. However, there is plenty of reasons for fans at the Fiserv Forum to be confident ahead of the 2019/20 season, with many already installing them as the favorites for the NBA Championship.

With the Raptors having gone on to become the first Canadian team to ever with the NBA title following their series win victory over reigning champions the Golden State Warriors, it is believed that only a small number of changes would see the Bucks once again compete on the biggest stage. Should the Bucks be able to attract the players in which they need during the upcoming 2019 NBA draft, they could well go one step further in 2020, with Head Coach Mike Budenholzer and his men sitting pretty in the betting odds from many of the leading betting apps.

Many had predicted the Bucks to push the Raptors a lot harder than they eventually did during the Eastern Conference Finals, with Giannis Antetokounmpo having lead the team to a series of impressive wins on the road, under the guidance of former Coach of the Year award winner Budenholzer. While they were unable to rediscover such form in their 4-2 defeat at the hands of the Raptors, the rest of the NBA will have certainly taken notice of the Bucks, meaning that they have the potential to be major contenders once again in 2020.

Having looked like a one-man team following the exploits of Antetokounmpo last season, the Bucks well and truly turned things around this year, improving significantly upon their 20th place ranking when it came to defense. Elsewhere, Khris Middleton, Eric Bledsoe and Brook Lopez all stepped up to the plate in a major way, while even rookie Donte DiVincenzo showed his promise, having shot just 37% from three throws during his time at Villanova.

Coach Budenholzer will undoubtedly look to where things went wrong, however, with his team having led their series against the Raptors 2-0 at one stage, only to see their season unravel before their eyes. Antetokounmpo was among the favorites for the league’s MVP award after helping the Bucks to a 60-win season, however, the future of the Greek forward remains unclear.

Antetokounmpo recently qualified for a five-year supermax contract extension worth a massive $247.3 million, however, this deal cannot be formalized until next year. Should the Bucks be able to once again mount an NBA title challenge, the Greek superstar could well be convinced to stick around in Milwaukee.

The Bucks strengths turned into weaknesses during the Eastern Conference Finals, which ultimately cost them. As a result, Milwaukee is likely to look to improve upon their roster when it comes to wing defense especially, with the likes of Keldon Johnson, Lugentz Dort, Matisse Thybulle having all been linked with moves over recent weeks.

The Bucks’ 2019 season is likely to feel like something of a failure at this point, however, due to where they started the year, coach Budenholzer has every reason to be proud of his players. While we will never know what would have happened against a Golden State Warriors team who were decimated by injuries during their series defeat to the Raptors, those in charge at the Fiserv Forum will now have their attention firmly placed on what to do in order to ensure that the Bucks remain in a position to compete with the very best in which the NBA has to offer.