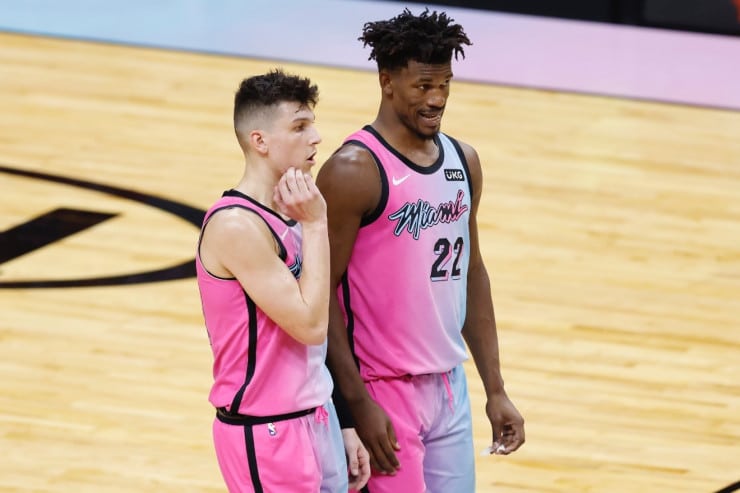 It’s an inter-conference matchup in South Beach on Saturday Night, as the San Antonio Spurs will travel to Miami to face the Heat the FTX Arena. This is the second of two meetings between these two, as the Heat won the first match-up in San Antonio, 112-95. Both of these teams are on the second night of a back-to-back. Will the Heat sweep the season series? Or will the Spurs force a split? Below, we’ll preview the Spurs vs Heat game and give free NBA picks for tonight’s clash in South Beach.

The Heat are 34-25-1 against the spread this season, while the Spurs are 31-28-1. Miami is tied with the Chicago Bulls atop the Eastern Conference, and have visions of an NBA Title. The Spurs, on the other hand, are 24-36 and are fighting for a spot in the Postseason Play-In Tournament. They currently sit one game out.

The Heat defeated the Knicks at MSG on Friday night, covering the 5.5 spread and maintaining the top seed in the East. But perhaps more notably, we received word on Friday that Victor Oladipo could make his season debut by Mid-March. Oladipo had surgery on his quad tendon last season and has not played since.

The Spurs are in the midst of their Rodeo Road Trip, and took down the Wizards in Double Overtime on the road Friday night. That win brought Gregg Popovich within two wins of becoming the winningest coach in NBA History. He already holds the record for most wins (combined regular season and Postseason), but is just two wins away from owning the most regular season wins.

Below, we’ll go over the injury news for the Heat Spurs game on  Saturday night. While these are the injuries as of now, we may seem the Spurs rest some players after double OT on the second night of a back-to-back. The Heat are also on a back-to-back, so keep an eye on any further injury reports throughout the day.

The Heat sit atop the Eastern Conference Standings, while the Spurs are battling for a play-in spot. Check out a complete breakdown of both teams below.

Heat Getting it Done at Home

The Heat are 19-7 on their home floor this season, going 14-12 ATS. Over the last ten games, they rank 2nd in Defensive Rating, but just 21st in Offensive Rating. So while they’ve held up defensively all season, their offense is well off their season-long standing of 8th in Adjusted Offensive Rating, per Dunks and Threes.

In their win against the Knicks on Friday night, they held New York to just 100 points and won by 15, despite RJ Barret scoring 46 points. The Heat had four players in double digits including Tyler Herro (25), Kyle Lowry (19), Bam Adebayo (16) and Jimmy Butler (23).

Spurs Gunning for a Play-in Game

The Spurs let one of their best players go at the trade deadline in Derrick White. But that has opened up more opportunity for others on the court, most notably Keldon Johnson. In the Spurs’ double overtime win on Friday night in Washington, DC, Johnson dropped 32 points on 10-20 shooting from the field. He also went 5-9 from beyond the arc.

This game is shaping up to be a tiring affair between two teams on the second half of a back-to-back. Miami is 4-5 ATS with zero rest, while San Antonio is 7-5 ATS with no rest. However, the OVER is 8-1 in Heat Games when they play on no rest, while it’s 5-7 to the over in the same situation with the Spurs.

With the Spurs coming off a double-overtime battle, they’ve decided to rest their three best players in Poeltl, Murray and Keldon Johnson. With that, back Miami to take care of business and cover the spread in a game the Spurs are seemingly giving away.

Get free NBA bets for the Heat vs Spurs game at BetOnline below.