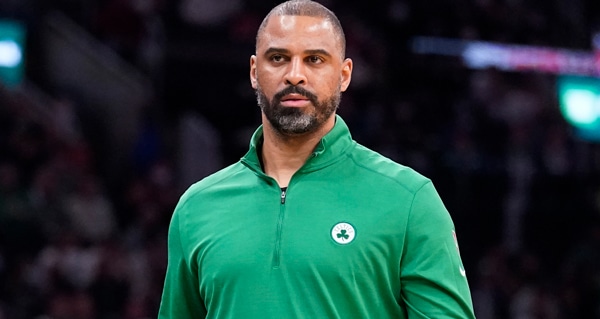 Just six days ago the Brooklyn Nets fired head coach Steve Nash after a 2-5 start to the season. Hours later, reports said that the Nets were close to hiring former Celtics head coach Ime Udoka. Now, the Nets are receiving blow back across the league.

The Boston Celtics suspended Ime Udoka for the entire 2022-23 season. Boston announced that he had an intimate relationship with a team employee. Brooklyn are in the market for head coach and Udoka’s name came into consideration. He was an assistant coach for Brooklyn in 2020 under Steve Nash. The Nets may be rethinking their decision on wanting to hire Udoka after some of the backlash they’ve been receiving.

Suspended Celtics coach Ime Udoka has emerged as the likely next Brooklyn Nets head coach and his hiring could be finalized as soon as the next 24-to-48 hours, sources tell ESPN. Celtics will let him leave for another job.

Nets may be rethinking wanting to hire Ime Udoka

Hours after Nash was fired, some of the most tapped-in NBA sources said the Nets could hire Udoka in 24-to-48 hours time. Tomorrow will be a week since they fired Nash and nothing has happened yet. It could be due to the blow back that Net’s owner Joe Tsai was getting about potentially hiring the former Celtics head coach.

Udoka was suspended by the Celtics on 9/22/22 for violating the Celtics code of conduct. That’s why he is a potential hire for the Nets. If Udoka would have been suspended by the league, then the Nets wouldn’t be an option. Boston has said they are willing to let him leave for another job. It makes you think what happened may have been somewhat serious as Udoka was the head coach who helped lead Boston to the NBA Finals last season.

Brooklyn is already tangled up in the Kyire Irving controversy and their receiving a lot of criticism for now wanting to add Udoka to the team. One league source said that there is “too much potential drama” if they hire him. Reporters think that Commissioner Silver may have stepped in and taken part in the matter. Apparently “there’s been some concern from women in leadership positions within the Nets”, which doesn’t seem surprising. One thing has been consistent for the Nets this season ; drama!