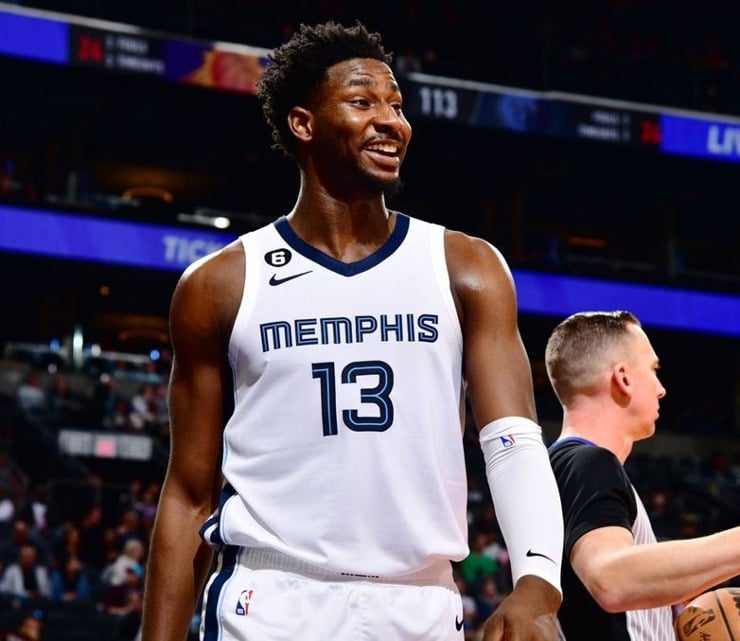 What makes Jackson’s blocks statistic impressive is the fact he’s played 10 fewer games than all other players currently in the top 10. Through just 22 starts, the center has recorded 69 total blocks.

According to a couple of NBA betting sites, Jaren Jackson Jr. is the top favorite to win Defensive Player of the Year. The Grizzlies center is favored to win over Brook Lopez, Giannis Antetokounmpo, and Bam Adebayo.

JJJ has played 10 fewer games than everyone else in the top 10. pic.twitter.com/UWT99X2Uxp

Lopez has made 37 appearances this season, Nic Claxton has made starts in 35 games, and Myles Turner has played a total of 33 contests. If he can stay healthy, the NBA Defensive Player of the Year award is Jackson’s to lose.

On Thursday, in Memphis’ 123-115 win over the Orlando Magic, Jackson recorded a season-high 31 points in 32 minutes played. In addition to grabbing 10 boards, the center shot 12-of-14 (85.7%) from the field and made two 3-pointers. Ja Morant and Jackson combined for 63 points.

During the second quarter, the Grizzlies scored 43 points, finishing with a 65-43 lead at the half. Jackson contributed 13 points and five rebounds before halftime. Orlando outscored them 72-58 in the final two quarters. However, the 2021-22 blocks champion still dominated the paint.

Jaren Jackson Jr. is now the favorite to win DPOY. He's averaging 3.2 blocks & 1.1 steals. Memphis also leads the NBA in defensive rating since his season debut. However, he's only averaging 25.8 MPG & only two players have ever won it averaging less than 30 #BigMemphis

“He set a tone in that first quarter for us, blocked [three] shots,” Grizzlies coach Taylor Jenkins said. “Overall, you felt his force tonight, his physicality on both sides. It’s definitely one of his most impressive [games], if not the most, so far for J.J.”

Dillon Brooks ended his outing with 11 points, six boards, and six assists. “He’s a one-of-a-kind talent,” Brooks said of Jackson. “He’s one of our guys who’s a mismatch nightmare, so we need him to be aggressive every night on both ends.”

Furthermore, Jaren Jackson Jr. led the NBA in blocks last season with a total of 177. Memphis has played 38 games so far, and the center has a whopping 69 blocks already. It would be a tall order to amass at least 180 blocks in a single season in fewer games. Though, barring a major injury, he could beat his own blocks record.