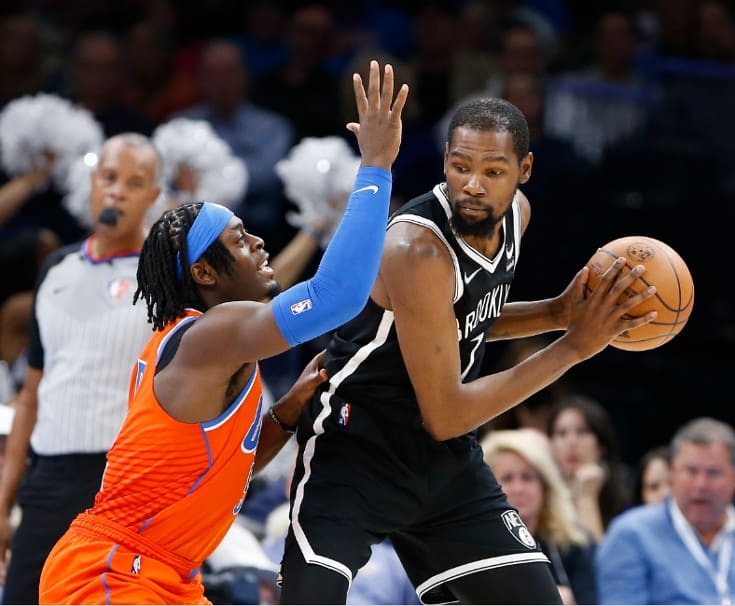 The Brooklyn Nets are set to take on the New York Knicks on Sunday at 1. This game will be played at the Barclays Center as Brooklyn will be coming in as the number eight seed in the Eastern Conference with a 34-33 record, and the Knicks will be coming in with number 12 seed with a 28-39 record. Brooklyn is looking to solidify their playoff spot while the Knicks are trying to do everything they can to try to sneak into that number 10 seed.

The Knicks and the Nets will meet at the Barclays Center on Sunday. Brooklyn is looking to win their third game in a row while the Knicks are finally back from their West Coast road trip.

The Knicks will travel over to Brooklyn on Sunday for a battle versus the Nets. For the latest NBA betting trends and NBA free picks on Sunday’s game, check out our Nets vs Knicks preview below.

The Brooklyn Nets have had an interesting season, to say the least, due to the Kyrie Irving situation and Kevin Durant being injured. However, Kevin Durant has now returned and Brooklyn is looking like the team that everybody expected them to be as they are coming off two impressive wins.

In the Brooklyn Nets’ most recent game against the Philadelphia 76ers, they were able to win by 29 points behind Kevin Durant’s 25 points and Kyrie Irving’s 22 points.

The New York Knicks just got back from a West Coast road trip and it was a successful trip for this team. However, they are 3-7 in their last 10 games and are coming off a tough loss to Memphis Grizzlies where they lost 118-114. In that game, Julius Randle led the way with 36 points, while RJ Barrett also had 23.

The Knicks did have a few impressive wins while on their West Coast road trip as they were able to take down the Los Angeles Clippers and the Dallas Mavericks.

The New York Knicks are going to be coming in with the 20th rated net rating, the 23rd rated offensive rating, and the 14th ranked defensive rating.

For this game, I’m going to go with the Brooklyn Nets to cover the spread. Although Kyrie Irving will not be able to play in this game because of the New York City Covid mandates, I do think that Kevin Durant is going to be more than enough for this Nets team to get the job done. If Brooklyn’s last name against the Philadelphia 76ers was any indication about the future of this team, they have to be feeling pretty confident.

The Knicks are also returning home after a lengthy West Coast road trip, so I expect them to struggle a little bit in the next few games.

Get free NBA bets for the Knicks vs Nets game at BetOnline below.