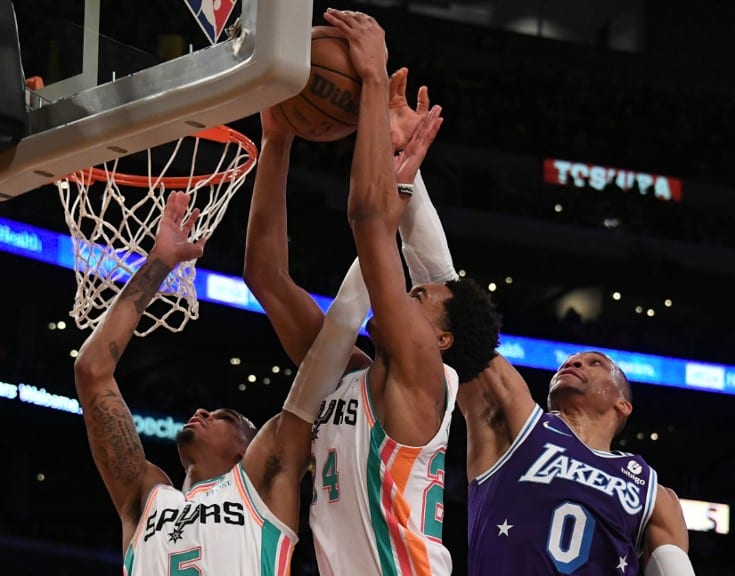 Without Anthony Davis, can the Lakers beat the melting Spurs for the third time this season? San Antonio is piling on 110 points offensively each game. Including the starting lineups, our top NBA picks and betting trends are available below. Check out our best NBA betting sites for 2022.

All Lakers vs Spurs betting odds can be found at BetOnline.

Leading into Monday night’s intraconference rematch, the Lakers are 1-3 in their last four contests. On Saturday, in their 124-116 home win over the Warriors, forward LeBron James added another double-double to his career total. He amassed 56 points, 10 rebounds and 3.0 assists in 39 minutes played. In the second quarter, Golden State outscored them 42-30.

However, the Warriors shot 9-for-19 (47.4%) at the free throw line. The Lakers also generated 35 points in the fourth quarter. After this surprising win, the team has won just three of its past 10 games played. Los Angeles is 1-4 ATS in its previous five matchups versus Western Conference opponents.  The Lakers are 9-19 away, 19-16 at home and 13-15 ATS on the road.

As for the Spurs, they have not won a game since their 157-153 high-scoring win against the Wizards. That game was played on Feb. 25. San Antonio remains on a four-game skid. On Saturday, in their 123-117 road loss versus the Hornets, forward Keldon Johnson led his team in scoring with 33 points in 37 minutes played. Free NBA picks are below.

Referring to ESPN’s Basketball Power Index, the Spurs have a 63.3% chance of winning.

The Lakers are still a below-.500 team, but the Spurs are playing even worse right now. The Spurs could have a bounce-back performance tonight. Oddsmakers are expecting it. Therefore, contemplate picking the Spurs to win, they will cover the spread and the total will go under 234.5. If you are unfamiliar with basketball betting, read our handicap betting guide. Other NBA picks are on the main page.

All NBA betting lines were retrieved from BetOnline. Click below to claim a free bet, if you’re a new customer.