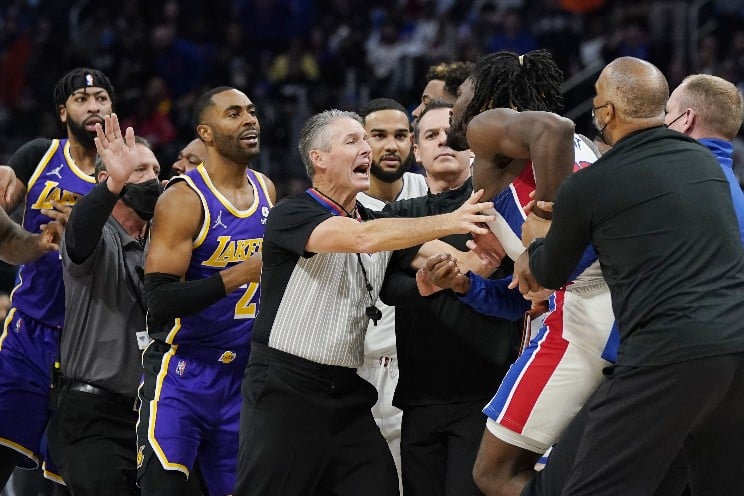 Los Angeles Lakers forward LeBron James has received a one-game suspension for elbowing Detroit Pistons center Isaiah Stewart in the face during Sunday’s game. With the Lakers trailing 78-66 in the third quarter, James appears to elbow Stewart in the face after Pistons forward Jerami Grant made his second free throw.

Then, the twenty-year-old confronted LeBron; benches cleared across the court. Stewart was issued two technical fouls after the incident, and James received a flagrant foul 2. Afterwards, both players were immediately ejected as well.

In addition to the 17-time All-Star’s punishment, the league office also issued Stewart a two-game suspension. Per sources, the 16th overall pick of the 2020 NBA Draft received a two-game suspension for “escalating an on-court altercation by repeatedly and aggressively pursuing another player.”

However, the length of the suspensions is controversial, considering the video shows LeBron instigating the scuffle. Had the nineteen-year NBA veteran never touched Stewart’s face, the center would have had no logical reason to appear provoked. Even with intertwined arms, intent is important when disciplining players. Of course, a bad angle in any video can be misleading.

The Lakers-Pistons rematch is on Sunday, Nov. 28

Moreover, LeBron James will serve his suspension when the Lakers play the Knicks at Madison Square Garden on Tuesday at 7:30 p.m. ET. Likewise, the Pistons play the Heat at home on Tuesday as well. That game begins at 7 p.m. ET. Next, Detroit will play the Bucks on Wednesday at 8 p.m. ET. Isaiah Stewart will miss both games.

James is projected to forfeit roughly $284,000 in salary, whereas Stewart will lose approximately $45,000. This is the first time in the four-time MVP’s career he will not play because of a suspension. Thus far, James is averaging 22.8 points, 5.0 rebounds and 6.1 assists per game this season.

Through sixteen games, Stewart is averaging 7.3 points, 7.1 rebounds and 1.1 assists per game. The Lakers and Pistons will face off again on Sunday at Staples Center. Ahead of the rematch, sportsbook oddsmakers are currently calculating the latest ejection odds for James and Stewart. The ratings will go through the roof in this next head-to-head contest.