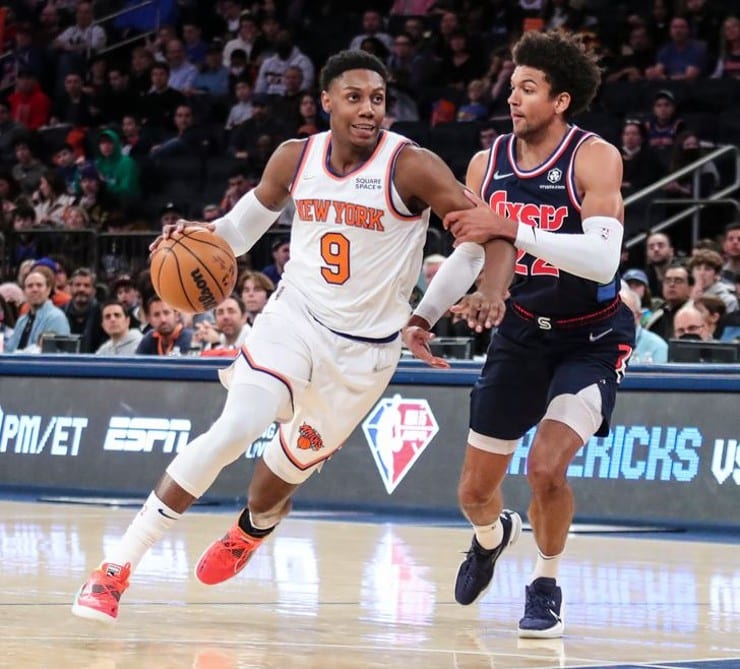 The NBA released its full schedule for the upcoming 2022-23 season, and the NBA Christmas Day schedule this year features a five-game slate. Similar to watching football on Thanksgiving, the matchups aren’t as important. Fans just love watching sports games with their families during the holidays.

The Philadelphia 76ers play the New York Knicks at noon ET on Christmas Day. Both teams have revamped their rosters in the last couple months. During the offseason, the 76ers signed Danuel House and P.J. Tucker. The Sixers also traded with the Grizzlies for De’Anthony Melton.

Meanwhile, Jalen Brunson signed a four-year, $104 million contract with the Knicks. And the team traded Kemba Walker, Alec Burks and Nerlens Noel to the Detroit Pistons. Knicks president Leon Rose is still pursuing Donovan Mitchell from the Utah Jazz. A trade package could be in the works.

Next, the Los Angeles Lakers will face off against the Dallas Mavericks at 2:30 p.m. ET. While the Mavs had quite a disappointing offseason, at least the Lakers are better on paper now than they were during the second half of the 2021-22 season.

In April, Lakers head coach Frank Vogel was fired as well. A month later, Darvin Ham was announced as the team’s 28th head coach in franchise history. Plus, the 2022-23 season will be Mavs coach Jason Kidd’s second season coaching with Dallas. So far, this NBA Christmas Day schedule is decent.

Furthermore, the Milwaukee Bucks will take on the Boston Celtics at 5 p.m. ET. This is a classic rematch of the Eastern Conference semifinals from last season. Of course, the Bucks lost to the Celtics in seven games, and they played without Khris Middleton. The forward sprained his MCL in the first round of the playoffs.

Needless to say, the Celtics had one of the best offseasons in the league. In July, the C’s traded Daniel Theis, Aaron Nesmith, Malik Fitts, Juwan Morgan, Nik Stauskas and a 2023 first-round draft pick to the Indiana Pacers for Malcolm Brogdon. Plus, Boston signed veteran forward Danilo Gallinari to a two-year deal.

Moreover, the Memphis Grizzlies play the Golden State Warriors at 8 p.m. ET on Christmas Day. This contest is a rematch of the Western Conference semifinals from last season.

The best word one could use to describe that playoff series is dramatic. Warriors forward Draymond Green and Grizzlies guard Ja Morant did more than enough trash-talk in the playoffs. In Game 3, Morant sustained a critical injury in the fourth quarter.

After the Warriors defeated the Celtics in six games of the 2022 NBA Finals, winning their seventh championship in franchise history, Morant and Green continued their gamesmanship on social media. They wanted their matchup part of the NBA Christmas Day schedule, and that’s what they got.

However, Golden State’s offseason was underwhelming to fans. They lost Gary Payton II and Otto Porter Jr. during free agency.

Even though G.M. Bob Myers was able to sign Donte DiVincenzo to a two-year, $9.3 million contract, fans are unsure if the Warriors’ frontcourt has taken a hit. For good news, Golden State re-signed Kevon Looney on a three-year, $25.5 million deal.

For the final Christmas Day contest, the Phoenix Suns face off against the Denver Nuggets at 10:30 p.m. ET. During the 2022 NBA Playoffs, the Suns blew another two-game lead. They had a 2-0 series lead over the Dallas Mavericks in the Western Conference semifinals.

Though, the Suns went on to lose in Game 7, and it was on their homecourt at Footprint Center.

During the offseason, the Suns re-signed guard Devin Booker to a four-year, $224 million max extension. And center Deandre Ayton signed a four-year, $133 million deal with the Pacers. But the Suns matched the high offer.

As for the Nuggets, they signed Kentavious Caldwell-Pope to a two-year, $30 million contract extension. He was traded by the Washington Wizards to Denver for Will Barton and Monte Morris. With Bones Hyland and two-time league MVP Nikola Jokic, the Nuggets are in good shape.

Having said that, can the Nuggets finally make it to an NBA Finals? For years, the team either fell short during the second round or in the Western Conference Finals. To add insult to injury, they lost to the New York Nets in the 1976 ABA Finals. The articles related to the NBA Christmas Day schedule are on the main page.