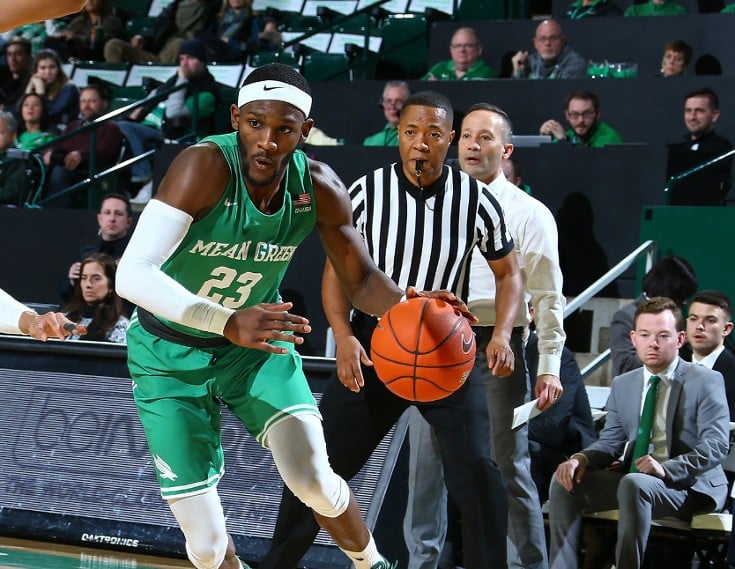 In Tuesday night’s first-round matchup of the National Invitation Tournament (NIT), the No. 7 Texas State Bobcats are facing off versus the No. 2 North Texas Mean Green; free March Madness picks are available here. North Texas averaged 64.90 points per game during the regular season. Continue scrolling for Bobcats vs Mean Green preview content.

Will Tyler Perry and the Mean Green beat the Bobcats tonight? The junior guard is averaging 13.6 points and 2.5 assists per game this season. UNT has won seven straight contests at home. Including the starting lineups, our top March Madness picks and betting trends are posted below.

All Texas State vs North Texas betting odds can be found at BetOnline.

Entering tonight’s interconference matchup, head coach Terrence Johnson and the No. 7 Texas State Bobcats are striving to defeat the No. 2 North Texas Mean Green. The Bobcats’ nine-game winning streak came to an end after losing 79-72 against the No. 8 Louisiana-Lafayette Ragin’ Cajuns. Of course, that game was played during the Sun Belt Tournament.

In the Bobcats’ loss to the Ragin’ Cajuns, guard Mason Harrell scored a team-high 16 points in 28 minutes on the court. Guard Caleb Asberry also closed out his performance with 15 points, 3.0 rebounds and 2.0 assists in 30 minutes played. Now, Texas State is 8-5 away, 12-1 at home, 1-1 at a neutral site and 7-6 ATS on the road. Free March Madness picks are below.

Additionally, in the No. 2 North Texas Mean Green’s 42-36 home loss against the No. 3 Louisiana Tech Bulldogs in the Conference USA Tournament, forward Thomas Bell III scored a team-high 10 points in 38 minutes of action. This was quite a low-scoring performance from both teams. While the Bulldogs and Mean Green struggled offensively, North Texas shot only 13-for-54 (24.1%) from the floor.

Referencing ESPN’s Basketball Power Index, the Mean Green have a 87.4% probability of winning.

Regarding other head-to-head matchups, in the previous three meetings, the Mean Green are 3-0 against the Bobcats. On Dec. 19, 2010, the last time these teams played one another, UNT won 85-62 at home. Keep in mind, the Mean Green are 8-2 in their past 10 games played this season.

Next, North Texas is 12-2 at home, 9-1 away, 3-3 at a neutral site and 7-5 ATS at home. The Mean Green are 1-4 ATS in its last five contests played in March. Texas State vs North Texas preview, prediction and free March Madness picks are below.

Not to mention, the total has gone under in four of UNT’s last five games when playing as the favorite. Therefore, think about picking the Mean Green to win, the Bobcats will cover the spread and the total will go over 118.5. For March Madness betting, feel free to read our handicap betting guide. Other March Madness picks are on the main page.