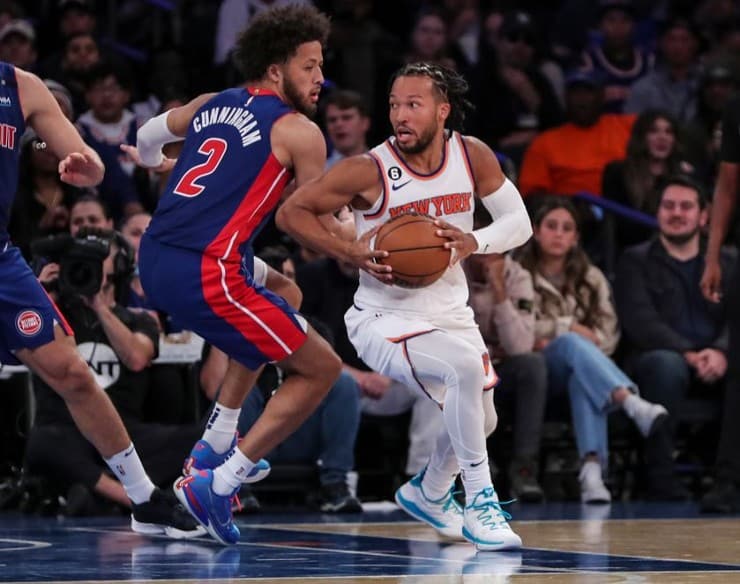 Watch Jalen Brunson end his Knicks preseason debut with 16 points, 1 rebound, and 5 assists in 20 minutes of action against the Detroit Pistons on Tuesday.

In the Knicks’ 117-96 preseason win over the Pistons, Brunson also shot 7-of-9 from the field and 2-of-4 from 3-point range. Fellow teammate RJ Barrett closed out his preseason debut with 21 points, 5 rebounds, and 2 assists in 23 minutes played.

Last season, in 79 appearances with the Dallas Mavericks, Brunson averaged career-highs of 16.3 points, 3.9 rebounds, and 4.8 assists per game.

Some NBA betting sites are showing bottom-15 odds for the Knicks winning a championship in 2023. Despite low title odds, a playoff appearance is not out of the question. Find out which sportsbooks are expecting a postseason berth.

According to Basketball-Reference statistics, Brunson is projected to average 18.3 points, 4.7 rebounds, and 5.3 assists per contest with the Knicks in the 2022-23 season.

Barring any major injuries, there’s a good chance the Villanova product will score 20 points per game. On November 3, 2021, Brunson recorded a career-high 31 points against the San Antonio Spurs. Watch his highlights below.

Playing alongside Luka Doncic, the New Jersey native finished third in scoring on the Mavericks. Kristaps Porzingis ranked second in scoring with Dallas, but he plays center.

It appears the Mavericks made a mistake trading away Porzingis and Spencer Dinwiddie. After the 2021-22 season, Brunson went on to sign a four-year, $104 million contract with the Knicks in July.

Even if Brunson had already decided to leave — considering his father is a Knicks assistant coach — Dallas is now a weaker team. Doncic can only do so much.

Meanwhile, the Knicks are expected to return to the playoffs in the 2022-23 season. Last season, the team finished 37-45 (.451) and 11th overall in the Eastern Conference. Watch them make the playoffs in 2023. Bettors are counting on it.

In head coach Tom Thibodeau’s first season coaching the Knicks, the team went 41-31 (.569) and earned the fourth seed in the conference. Not to mention, Julius Randle won NBA Most Improve Player of the Year. And Thibodeau won his second Coach of the Year award.

During the first round of the 2021 NBA Playoffs, the Knicks lost in five games against the Atlanta Hawks. However, at least they qualified for the postseason.

New York went through six coaches and missed the playoffs seven times from the 2013-14 season through the 2019-20 season. With Brunson, Randle, and Barrett, the Knicks should return to the playoffs in 2023.

While it’s just the preseason, both Jalen Brunson and RJ Barrett looked good against the Pistons. Feel free to watch other highlights on the main page.