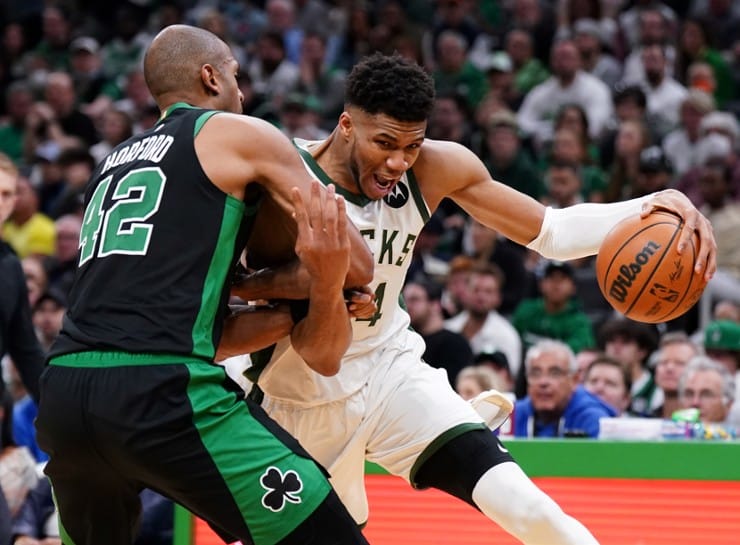 On Tuesday, the second round of the 2022 NBA Playoffs continues; free NBA playoffs conference semifinals odds, Game 2 picks and predictions are featured here. Our analysts at Basketball Insiders have selected the winners of the two matchups today.

On Tuesday, May 2, the NBA playoffs second-round doubleheader can be watched live on TNT. First, the Milwaukee Bucks take on the Boston Celtics at 7 p.m. ET. Then, the Golden State Warriors play the Memphis Grizzlies at 9:30 p.m. ET.

Boston is once again favored to defeat Milwaukee, while Golden State is favored for the second time to beat Memphis in Game 2. The Bucks prevailed as underdogs in Game 1 against the Celtics. Therefore, pick them again if you trust them enough to win. Some gamblers might not agree on that one — myself included.

Leading into tonight’s conference semifinals contest, the Celtics are 4.5-point favorites over the Bucks at TD Garden. Of course, oddsmakers were off in Game 1. On Sunday, Milwaukee defeated Boston 101-89 on the road. In the second quarter, the Bucks outscored them 29-22. Jrue Holiday led his team in scoring with 25 points. Also, Giannis Antetokounmpo ended his performance with a triple-double. He amassed 24 points, 13 rebounds and 12 assists in 38 minutes played.

Besides losing by double digits in the first matchup, the C’s looked horrible defensively. So much for having home court advantage; the Bucks can win anywhere. For Milwaukee’s injury report, the team will be without Khris Middleton in this series. Plus, George Hill was downgraded to out for Game 2. On the other side, Celtics’ guard Marcus Smart is listed as a gametime decision. For betting trends, the total has gone under in the Bucks’ last six games played. And Milwaukee is now 12-6 in its past 18 meetings versus Boston.

Not to mention, considering this assessment, the Celtics are the best bet to win Game 2, they will cover the spread and the total will go over 215. Quite a few bettors are not anticipating the Bucks to go up by two games in this series. Other NBA playoffs conference semifinals odds, Game 2 picks and predictions are on the main page.

Additionally, the Warriors are two-point favorites against the Grizzlies at FedExForum. In Game 1, Golden State bested Memphis 117-116 away. Jordan Poole scored a team-high 31 points in 38 minutes played for the Warriors. Stephen Curry also closed out his outing with 24 points. During the second quarter, Warriors’ forward Draymond Green was ejected after fouling Brandon Clarke. It was a flagrant 2 foul.

Moreover, while the Warriors coasted without Green, they still got the job done in the end. Pertaining to Golden State’s injury report, the team has three players listed: C James Wiseman (out), SF Andre Iguodala (out) and SG Klay Thompson (gametime decision). They definitely need Thompson to play. He put up 15 points in Game 1. For one notable betting trend, Golden State is 10-1 in its previous 11 contests. The total has gone over in six of their last seven games played, too.

Next, for the Grizzlies’ injury report, they have five players listed: C Killian Tillie (out), PF Santi Aldama (out), C Steven Adams (out), SF Ziaire Williams (gametime decision) and SG Desmond Bane (gametime decision). The Warriors could take a two-game series lead versus the Grizzlies. However, they only lost by one point at home in Game 1. Memphis is more than capable of winning Game 2.

Equally important, the Grizzlies are 4-2 ATS in their last six contests. Also, the total has also gone under in eight of their previous 12 matchups versus the Warriors. To make things more interesting, pick the Grizzlies to win, they will cover the spread and the total will go over 227.5. More NBA playoffs conference semifinals odds, Game 2 picks and predictions are on the main page.

BetOnline is one of the best sportsbooks in California, Massachusetts, Tennessee and Wisconsin.